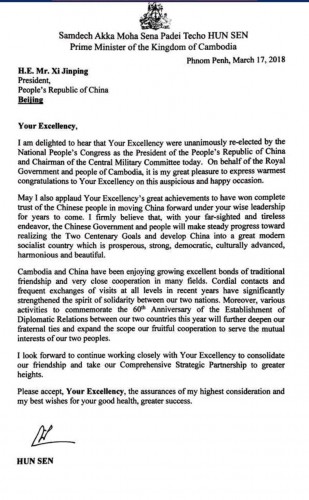 Prime Minister Hun Sen sent a warmest congratulation letter to Chinese President Xi Jinping for being re-elected by the National People’s Congress as the President of the People’s Republic of China and Chairman of the Central Military Committee on Saturday.

“I firmly believe that, with your far-sighted and tireless endeavor, the Chinese government and people will make steady progress toward realizing the Two Centenary Goals and develop China into a great modern socialist country which is prosperous, strong, democratic, culturally advanced, harmonious and beautiful.” Prime Minister Hun Sen wrote in the letter, addressed to President Xi, dated on March 17, 2018.

Xi Jinping, on March 17, 2018, was voted unanimously by the Congress to continue as president of the country in the second mandate. Xi Jinping took the post of Chinese President in the first mandate in January 2012.