PM Hun Sen: Who Seeks Justice for Me When My In-law Shot Dead and Assassination Attempted on Me 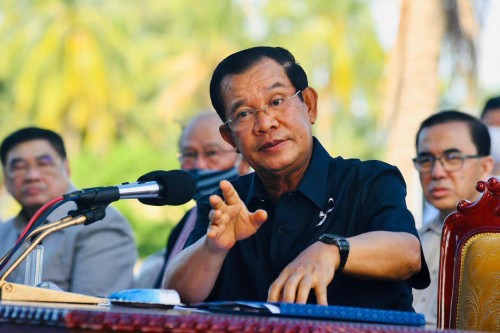 Cambodian Prime Minister Hun Sen recalled the event that his in-law was shot dead in 1996 in Phnom Penh and the attempted assassination against him in Siem Reap in 1998.
His remark was made at a visit to Freshwater Aquaculture Research and Development Centre in Peamro district, Prey Veng province on Tuesday.
“So who could seek justice for me when my in-law was shot dead in Phnom Penh in 1996 and when they attempted to assassinate me [with four B-40 rockets] in Siem Reap province,” the premier asked.
On 24 September 1998, while traveling to Siem Reap, the premier’s convoy was targeted by an attacker with B-40. The rocket missed him and struck a nearby house, killing one civilian, and injuring another.
20 years later, Prime Minister Hun Sen recalled, “If all the four B-40 rockets had exploded simultaneously or if there was no heavy rain to interfere the control line, I would have died at that time.”
“You have to know that long as I am the prime minister, I will not let you kill me, topple or launch colour revolution against me. At any cost, I must protect peace and lives of Cambodian people,” the premier underlined.