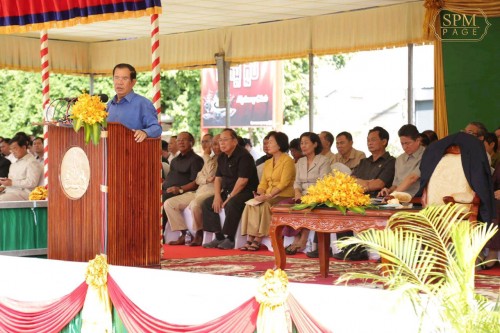 Prime Minister Hun Sen who is also the founder of the Cambodian Armed Forces reacted Monday against Sam Rainsy over his statements related to rebellion.

PM Hun Sen emphasized that in order to maintain peace and security in Cambodia, the Royal Government of Cambodia will get rid of some people if needed.

He added that those who want to overthrow the prime minister and do not succeed, imprisonment will be in return.

The premier made the statement at the ground breaking ceremony of a bridge across Tonle Sap River that will link to Chroy Changvar Satellite City and will cost about $35 million.

“You want to topple the government and overthrow Hun Sen, but you are less known about Cambodian soldiers and Hun Sen […] you are not able to overthrow Hun Sen’s military strength. If you want to try, prepare coffins for your losses and imprisonment is your only option”, said the premier.

In recent weeks, Sam Rainsy’s video was leaked on social media, displaying his speech addressed to overseas Cambodians living in the the United States in 2011, calling Cambodian armed forces to turn back their cannons to the government led by PM Hun Sen.

PM Hun Sen charged Rainsy’s remarks on the video as a link to Kem Sokha’s video, who is accused of treason, conspiring with the United States.

The top commanders and leaders of the Royal Cambodian Armed Forces and other government ministries have supported the government move against Sam Rainsy, saying that there is no way that Cambodian armed forces will follow Sam Rainsy’s appeal, instead charging him of committing an act of treason.