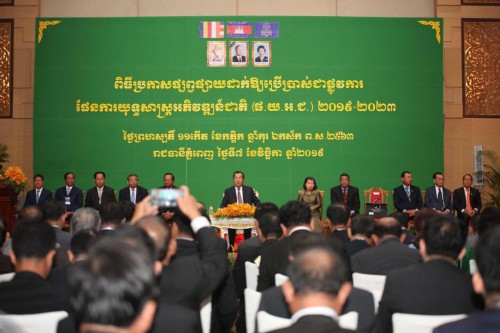 Cambodian Prime Minister Hun Sen expressed his concern over electricity shortage in Cambodia, as water level is low, particularly during the dry season, addressing at the ceremony on official implementation of National Strategic Development Plan (NSDP) 2019-2023, held at Sokha Phnom Penh Hotel on 7 November 2019.
“The concern is that our hydro dams are starting to run out of water, according to the figures sent by Mines and Energy Minister Suy Sem. Yesterday, out of the 1,328 megawatts hydropower, we could generate only 184-687 megawatts,” said the premier.
However, he has emphasized the efforts of the Royal Government in solving the electricity shortage by creating more sources of energy, including solar farms, coal, oil, gas power plants, and buying from neighbours, including Laos and Vietnam.
The premier also appealed to hotel and business owners to use their personal generators when necessary.
In April 2020, Cambodia will operate 400-megawatt power generators in Phnom Penh.