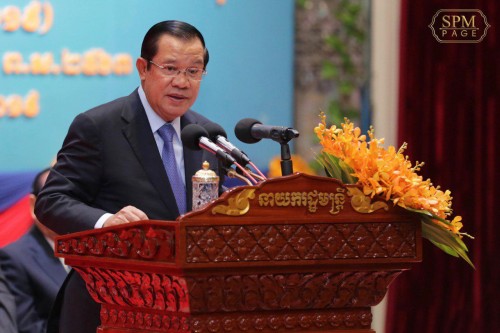 Prime Minister Hun Sen expressed satisfaction over the growth of Cambodia’s banking sector over the past 40 years, speaking Thursday on the occasion of the 40th Anniversary of the establishment of National Bank of Cambodia.
The premier has observed that the most significant role of the National Bank is stabilizing the value of Khmer Riel, which only changes in circle of 1 percent with low inflation rate in circle of 3 percent.
“Banking sector in Cambodia has developed proudly over the past 40 years. The kingdom’s banking system is effective, resilient, and highly-integrated into the region and the world,” the premier addressed before 600 attendees including foreign distinguished guests and development partners at Chaktomuk Conference Hall.
“Banking sector serves as a backbone to support national economic growth,” he underlined.
According to Premier Hun Sen, approximately 71 percent of Cambodian adults have access to financial services and that financing through banking system have increased by 115 percent of GDP for the fulfillment of investment on all sectors.
He stated that through bank loans, Cambodian people have the opportunity to expand their business; have a better standard of living; and buy affordable housing, which are vitally contributing to socio-economic development and harmony of the nation.
Strongman Hun Sen continued that Cambodia received monetary independence on 23 December 1954, leading to the establishment of National Bank and successful circulation of Khmer Riel currency in September 1955. During Genocidal Regime 1975-1979, Khmer Riel was completely eliminated. Only in 7 January 1979 that the National Bank of Cambodia re-established, yet under economic and political sanctions of the international community.