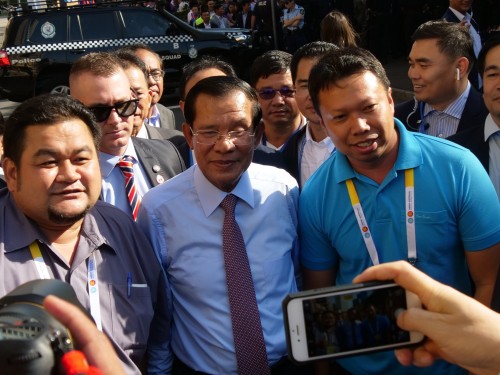 Prime Minister Hun Sen told Cambodian people in a meeting in Sydney on Friday that the third-party spy was the one who murdered Kem Ley.
Prime Minister said that there was no benefits for him to murder Kem Ley; in contrast, he had arranged a special meeting with Dr Kem Ley, but was killed before the meeting.
“Kem Ley was scheduled to meet with me on July 18,19; unfortunately, he was murdered on the 10th. The death of Kem Ley did not bring any benefits to the government of Hun Sen or Hun Sen, but the opposition group,” stated the premier.
He also addressed specially to Bou Rachana, Kem Ley’s wife, to not treat him as enemy.
“Please don’t be confused Mrs. Bou… you are in a big confusion to treat me as an enemy and a treat as a thief as a father. I respect Kem Ley. I think a spy killed Kem Ley, as Kem Ley had a different politics from the opposition group,” the premier stated.
Kem Ley was shot dead by the gunman on the morning of July 10, 2016, at a convenient store in Phnom Penh.