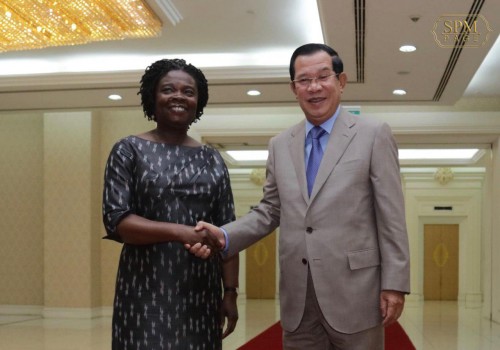 Cambodian Prime Minister Hun Sen has requested the World Bank to help Cambodia’s infrastructure by transforming dirt roads to Double Bituminous Surface Treatment (DBST), speaking in a courtesy call from Victoria Kwakwa, the World Bank’s vice president for the East Asia and Pacific Region, held at the Peace Palace Phnom Penh on 16 September 2019.
Eang Sophalleth, the premier’s personal secretary, told the press that Victoria has congratulated the premier on Cambodia’s rapid development, particularly high economic growth rate of seven percent per annum and reduced poverty and infant mortality rates.
Victoria continued that the World Bank has assisted many communities of Social Land Concessions (SLCs) on agriculture, education, and healthcare, which contributed to promoting the quality of lives of people.
Prime Minister Hun Sen thanked Victoria for her commendations and informed that providing SLCs to people is the prioritized policy of the government. Over the last seven years, the government has stopped providing Economic Land Concessions to private companies; instead, the government distributed lands to the communities for them to grow crops in order to promote their livings.
The premier also took note that human resource is prerequisite for country’s development. He requested the World Bank to further assist Cambodia on human resource and capacity building.
It is worth noting that after liberating the country from the Pol Pot genocidal regime in 1979, infrastructure rehabilitation was one of the top priorities of Cambodian Prime Minister Hun Sen among the four prioritized agendas, including water, road, electricity, and human resource.