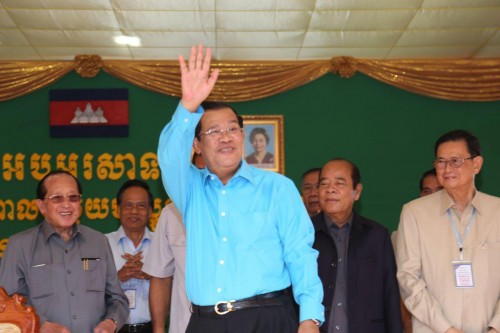 The premier questioned that what if this situation happened in their country, could they accept it?

They expressed grave concern regarding democracy in Cambodia and asked for the release of the opposition leader.

The premier’s remark was made when he visited more than 10,000 garment workers at Phnom Penh’s Canadia Industrial Park on Wednesday morning.

“I hope that foreign friends will analyze and listen to each word carefully,” stated the premier.

Even though some countries did not support the arrest of Kem Sokha, China, through Foreign Ministry spokesman, yesterday expressed their support for Cambodia’s action to maintain peace and safety.

Kem Sokha was arrested at his home at 00:35 am on Sunday by justice police in his house located in Toul Kok, Phnom Penh on charged of treason.

The arrest was made after a video broadcast by CBN showing Kem Sokha, speaking to his supporters in Australia in 2013 saying that he was advised by American and Canadian professors on running politics in Cambodia that will lately lead to a change of leader with similar strategy as that done in Yugoslavia.

The statement said Kem Sokha, conspired with foreigners had secrete plan to harm Cambodia and that is an act of treason.