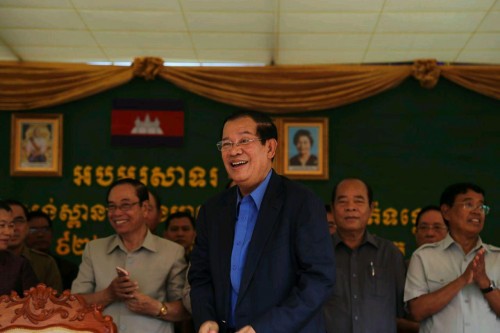 He considered this statement to be a serious insult to the lives of Cambodians.

He also announced to file a lawsuit to United Nations.

The premier’s reaction to the U.S Embassy was made on Sunday morning during his meeting with representatives of more than 4 thousand workers in Phnom Penh.

“It is very disappointing when the U.S stated that chemical bombs in Svay Rieng were tear gas. Is this tear gas used to kill people in the jungle? We hope that U.S embassy will visit the location, including the U.S PEACECORP, who has been granted another 3-month visa”, stated PM Hun Sen.

“If possible, US embassy should take some of the land as fertilizer to plant in the embassy. Many Cambodians are currently suffering from abnormal conditions caused by US chemical bombs. This case must be reported to U.N chemical department”, he added.

U.S embassy’s statement released on October 20 claimed that the bombs found in Svay Rieng Province were tear gas and not chemical bombs, and those gases are not harmful to the people.

So far, 15 locations and 45 victims were affected; 42 were treated at Svay Rieng hospital and 3 at a hospital in Phnom Penh.