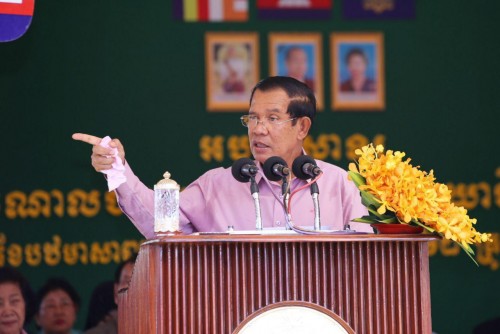 Shedding his tears, Prime Minister Hun Sen looked back to 41 years ago when he invested his life to liberate Cambodia from Pol Pot regime, leaving alone his unfortunate nation and his five-month pregnant wife.

“Today is the 41st anniversary of the day I used my life as a capital to liberate the kingdom; at this point I can’t hold my tear. It is too difficult. Youth today is very lucky,” the premier addressed to more than 17,000 workers on Wednesday in Takeo.

“My life is not only for myself, but for the survivals of the nation and of the people in danger,” he added.

He stressed that if he had made the wrong the decision, he could not imagine how Cambodia would have been.

“Our small force could not win Pol Pot’s 18 regiments. The best choice is to shed tens of thousands of tears when I stepped out of the motherland, leaving Cambodian people in danger, especially my pregnant wife,” said the premier.

He reminded that it was extremely hard for him to leave a letter for his wife, a letter that would not affect her mentality during her pregnancy. He told that he discarded many papers while writing. He finally wrote, “Farewell, darling, farewell to see you again.”

Prime Minister Hun Sen left the country at the age of 25 to fight for national liberation. It is enough of pain for every Khmer citizen; therefore, he urge to protect the return of the past.

To maintain peace, vote for the Cambodian People’s Party.