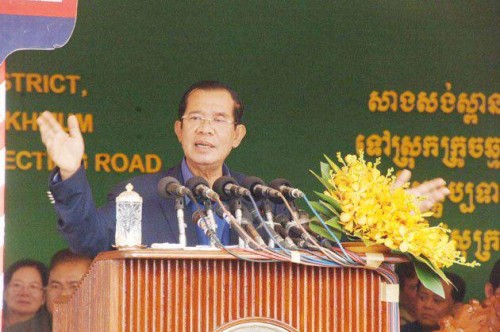 Prime Minister Hun Sen rejected former leader of Cambodia National Rescue Party Sam Rainsy’s remark on Wednesday, inviting him to stop political activities at the age of 65.
Speaking at the groundbreaking ceremony of the construction of a new Mekong River Bridge connecting Kampong Cham Province to Tbong Khmum Province, the premier considered Rainsy’s invitation as a crazy perspective that does not conform to Cambodia’s constitutional law.
Prime Minister Hun Sen claimed that Rainsy’s request is like exchanging pure gold with fake jewelry. He taunted Sam Rainsy as a smart guy, but always behind him.
Sam Rainsy was born in 1949 to a high-ranking family, but was named as a traitor, as he served the foreigners and was exiled from Cambodia on February 3, 2005, while Prime Minister Hun Sen was born to a farmer family, but currently serving as the Prime Minister of Cambodia.