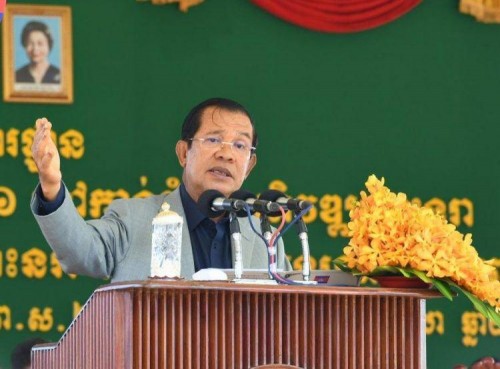 Samdech Akka Moha Sena Padei Techo Hun Sen, Prime Minister of the Kingdom of Cambodia, has once again made clarification over the news on Chinese military base on Cambodia’s territory.
“There are Chinese investors and technical experts here, but where is the Chinese armed personnel?” asked the Premier while presiding over the groundbreaking ceremony for the construction of two bridges linking National Road 1 to Koh Pich satellite city via Koh Norea development zone, in Sangkat Niroth, Khan Chbar Ampov, Phnom Penh this morning.
At the same time, Samdech Techo Hun Sen also raised the issue of some acts of protest in front of the Chinese Embassy in Phnom Penh last Friday when a dozen of people under clear political organisation and agenda gathered against the presence of Chinese armed personnel in Cambodia.
“Where are the Chinese troops in Cambodia to be expelled? Please show the evidence,” he added.
Samdech Techo Hun Sen reaffirmed that Cambodia has never permitted Chinese armed forces to base on its territory. He also asked for evidence for the concern over secret agreement with China.
Moreover, Samdech Techo Prime Minister called for a halt to the misunderstanding, and expressed his support to all legal actions against those who are involved in this case.