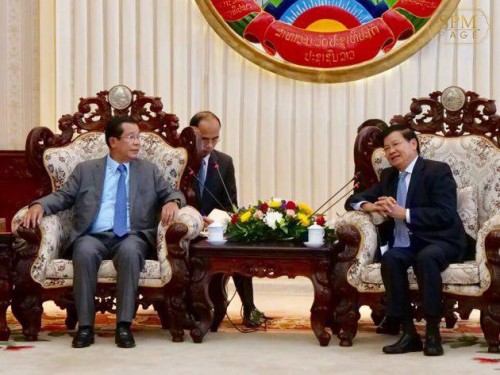 Cambodia’s Prime Minister Samdech Akka Moha Sena Padei Techo Hun Sen has confirmed to all his compatriots that the recent negotiation with his Lao counterpart on border issue is a diplomatic strategy for mutual benefits, not bowing down to Laos.
If there is no such the strategy, Laos may not withdraw its troops, said the premier at a graduation ceremony of the Royal University of Phnom Penh this morning, adding that Laos is a friend of Cambodia, not an enemy, and if he did not negotiate, there would be war.
“Cambodia and Laos are determined to settle the problem peacefully to avoid bloody confrontation,” he underlined. The Lao side will work with Cambodia on the remaining border issue based on the map Bonne 1/100,000, he pointed out.
In April, a group of Lao armed forces crossed the Sekong River into Cambodia’s territory by boat to stop Cambodia from building a road along the border in Stung Treng province. The Cambodian side asked its Lao counterpart at different levels to remove the troops several times, but the Lao side seemed ignoring this request.
On Friday last week, Samdech Techo Hun Sen issued an ultimatum to Laos to withdraw its troops without condition from the Cambodian territory before Aug. 17, 2017 after he has got no reply from his Lao counterpart to his letter dated Aug. 2, 2017 on the troop withdrawal request. Then on Saturday, he flied to Vientiane to talk about this issue. Finally, the Lao side agreed to pull back all its troops from the Cambodian territory.
Cambodian people from all walks of life expressed their congratulations and support to the just and timely move of the royal government in negotiating the border dispute with the Lao side, which could avoid war between the two countries.
Cambodia and Laos share a common border of 540 kilometres. 86 percent or 464.5 kilometres of the borderline has been already examined and 121 of the total 145 border markers have been so far planted.