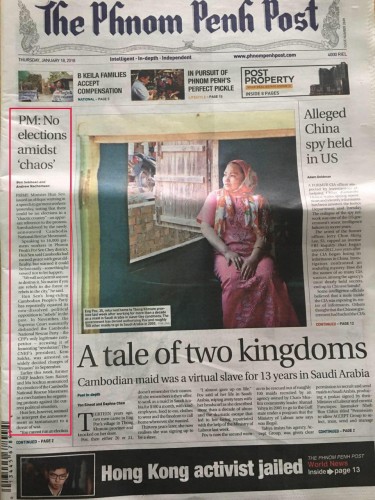 Prime Minister Hun Sen reacted strongly to Phnom Penh Post’s article entitled “The election would not take place amidst chaos”, and that he considered the article a lack of knowledge.
The premier’s response was made at the Publication of National Policy on Ageing 2017-2030 on Thursday morning.
The premier reaffirmed that the upcoming election will take place as planned, without any changes, despite what has happened.
“I would like to confirm that the Senate election on February 25, 2018 does not change and that we almost reach the election campaign, while the National Assembly election on July 29, 2018 must be carried out without any changes no matter what happens”, stated Prime Minister Hun Sen.
“In Cambodia, there is a clear definition of a 5-year assembly mandate that it cannot be dissolved unless the government is dissolved twice in 12 months, which means that voting in Cambodia does not grant right to Prime Minister like other countries, nor to His Majesty King, nor to the Assembly itself”, the premier explained.
He hopes that the Phnom Penh Post, including the analysts, will learn how to comment and analyze better.