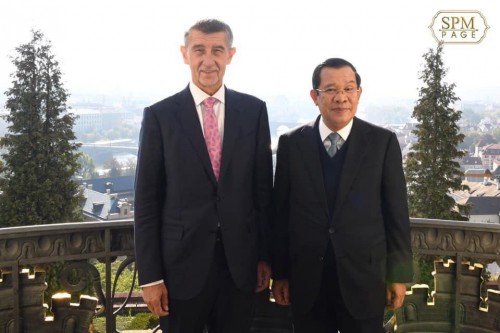 Cambodian Prime Minister Hun Sen announced to buy four more Czech-made Aero L-39 Albatros, speaking in a joint press conference with Prime Minister of Czech Republic Andrej Babis, held on 14 October in Prague, following the bilateral summit.
“Before Cambodia had purchased six L-39 jets. Now, I consider buying three-four more and other light weapons in order to strengthen the kingdom’s defense and security,” the premier stated.
It is worth noting that during the bilateral summit, Prime Minister Andrej Babis praised Cambodia’s efforts to maintaining peace and stability under the wise leadership of Prime Minister Hun Sen; and that he believed Cambodia will achieve visions of becoming a higher-middle income country by 2030 and a high-income by 2050.
Cambodia established the relations with the former Socialist Republic of Czechoslovakia since 18 May 1956. The relations became severed in 1975 during the Khmer Rouge regime, yet reestablished on 7 September 1996 after Czechoslovakia split.