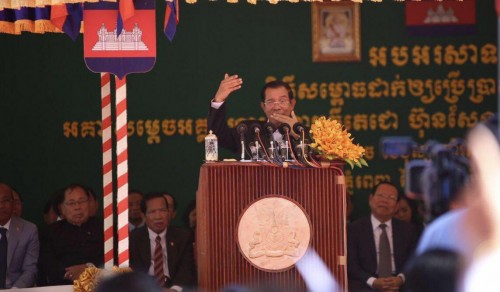 Prime Minister Hun Sen is proud of Cambodia for reducing the rate of HIV (AIDS), and smoking.
The statement was made when he chaired the inauguration ceremony of the new treatment building in Khmer-Soviet Friendship Hospital on Thursday.
“The declining rate of diseases in Cambodia is a good sign, and I am proud of that HIV did not spread much compared to other countries,” said PM Hun Sen.
The report of the National AIDS Authority in 2017 shows that Cambodia has reduced the rate of HIV infections by up to 50% since 2011 and continued to decline steadily.
Currently, Cambodia’s AIDS mortality rate continues to fall every year, thanks to the 97% health treatment and medicine coverage.
“I visited more than 300,000 workers, and I did not smell any cigarette from any workers”, added the premier.
PM Hun Sen, as a former smoker, advised people to reduce cigarette consumption or even give up.
Smoking poses a serious threat to the development of the country. In fact, 10,000 Cambodians die from smoking-related diseases annually, according to the World Health Organization.
According to the National Institute of Statistics, approximately $200 million was spent on purchasing smoking products and about $162 million was spent on smoking-related treatment, according to National Center for Health Promotion.