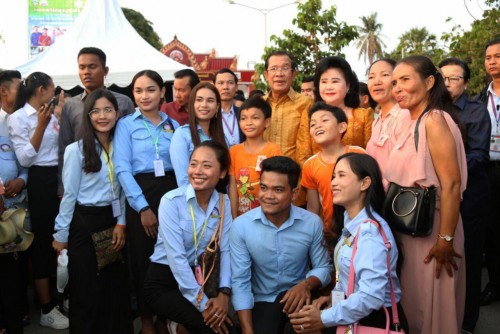 “We shall see the value of our hard-earned peace and win-win policy,” stated the Premier, adding that “Without peace, we could not perform anything; don’t even expect tourists! Even in our shelter, we gotta move on a regular basis.”

According to Prime Minister, Kampong Chhnang, 30 years ago, was a war zone between his army and the Khmer Rouge army; Today, the province has become a peaceful and developing that people are competing for lands.

Cambodia had been plagued by wars for almost three decades (1970-1998). A five-year war from 1970-1975 killed over one million Cambodians and inflicted the most severe destruction to the country’s socio-economic infrastructure. On 17 April 1975, the regime of Khmer Republic fell. People hoped to live in peace and start a new life. However, their hopes evaporated in a blink of an eye, as they fell into a newer disaster – the Khmer Rouge genocidal regime – a bloody ruling of which around 1.7 million Cambodians lost their lives from torture, hunger, and overwork within just 3 years 8 months, and 20 days.

Following the end of Khmer Rouge regime in 1979, Cambodia had not achieved peace until 1998. So to speak, the kingdom just gained an absolute peace in 1998, a total of 20 years and three months of peace as of today.