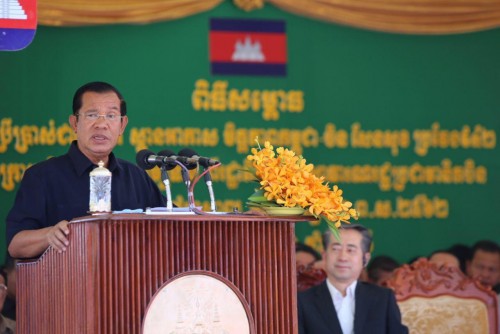 Cambodian Prime Minister Hun Sen ordered the authorities to crack down on anti-election group, who incited that the election ink will kill the voters in 24 hours.

The order was made when he presided over the inauguration ceremony of Cambodia-China Sen Sok Flyover Bridge on Monday.

“I’ve received information considered as a crime this evening. They said that on the Election Day, there will be two bottles of ink; the first bottle is the normal ink, and the second bottle will cause death in 24 hours,” said Prime Minister Hun Sen.

This is the same group that propagandized in 2013, publicizing that the election ink is erasable, he told.

“We clearly know who you are. If you don’t stop committing this crime, you will be subject to imprisonment,” he stated.

Urging people not to go to vote is okay but spreading falsified information is obviously not a freedom of expression, the premier underlined adding that such act destroys the national stability and the lives of people and is indeed intolerable.

Prime Minister Hun Sen said that in order to maintain peace and development, the best option is to vote for Cambodian People’s Party (CPP), which is ranked 20th.