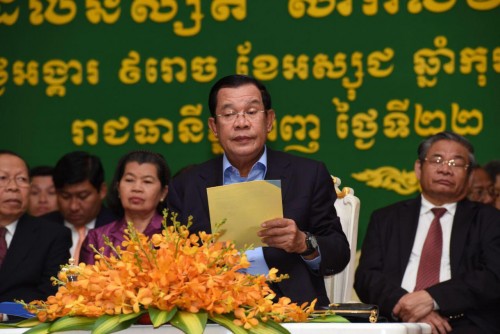 Cambodian Prime Minister Hun Sen ordered relevant institutions to study on the incineration project, converting trash in Cambodia to energy, addressing on Tuesday at the graduation ceremony of Build Bright University (BBU) at Diamond Phnom Penh.
“We will continue to study the issue of electricity through incarnation, but will not import trash from outside. We have to do it despite the high cost; otherwise, we would be flooded by trash,” said Prime Minister Hun Sen.
Phnom Penh is expanding in double size from 300 square kilometers to more than 600 square kilometers. The capital city is facing huge challenges in waste management due to population growth, increasing income and consumption levels, expanding urbanization and inadequate waste management including lack of proper waste collection and treatment facilities, technical staff as well as unclear responsibilities among staff members, according to a 2018 report, prepared by GES Centre Collaborating with UNEP on Environmental Technologies (CCET) of Institute for Global Environmental Strategies (IGES).
The 2018 report released by Cambodia’s Ministry of Environment said that the amount of garbage produced in the country has surged at a rate of about 10% each year, all caused by population growth, changes in lifestyle and packaging, and the lack of understanding on how to sort waste.
It added about 1.5 million tonnes of waste or 41 percent of the total annual waste collected annually were sent to dumpsites. About 400,000 tonnes or about 11 percent, were recycled. The remaining 48% was burned or thrown away into bodies of water.
Before, Cintri (Cambodia) Co. Ltd. is the only private company responsible in cleaning, collecting, and transporting Phnom Penh waste. However, over the past few months, many Phnom Penh residents have complained about the company’s low services.
Today, 22 October 2019, the premier announced to take out licence from Cintri Cambodia Co. Ltd, while the government will announce the bidding for three to four new companies to collect trash in Phnom Penh.
The Government is looking three to four new companies to collect trash in Phnom Penh, the premier added.