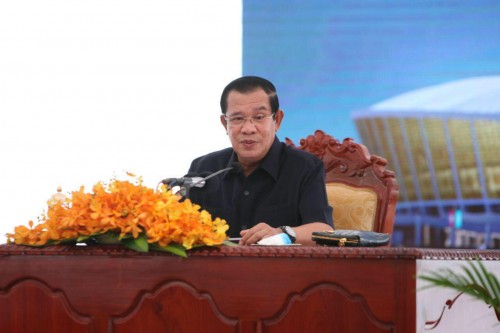 Cambodian Prime Minister Hun Sen ordered the minister of Land Management, Urban Planning, and Construction Chea Sophara to examine illegal construction which is speculated of corruption, speaking during his visit to the new stadium Morodok Techo National Stadium on Monday.
“Our experience in arresting the three corrupted officials in Pursat led us to speculate that the illegal construction caused by obstacles of getting the legal paperwork,” the premier stated.
Prime Minister also raised scenario that, “Supposed a man wanted to build a house, but he finds it hard to get a legal paper unless he paid some money to the officials. It would lead the man to just build his house without going through paperwork, making the construction illegal and technically error.”
The premier’s order was made after the director of Pursat Provincial Cadastral Office and two other officials were arrested by the Anti Corruption Unit (ACU) on Saturday morning, 27 July 2019 in Pursat province.
Cambodian Prime Minister Hun Sen confirmed this Monday that the arrest was made on the ground of corruption.
According to the premier, the trio include: Cadastral Office director Leam Bunroeun; deputy director of construction Cheang Vuthy; and another official Te Buntheng. They asked for USD 100,000 from an investor who requested for paperwork to construct a factory in Pursat.
The strongman called the corruption the act of destroying the nation and the good achievement built by the government.
If found committing corruption, the officials will be removed from the posts and their properties will be seized, Prime Minister warned today.