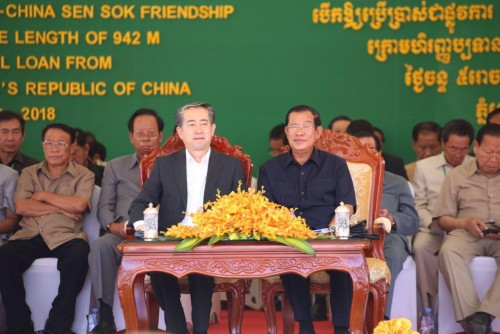 His remarks came after a group of pro-foreign and anti-election people planned to pollute information on social media, aimed at causing chaos to the election on 29 July 2018.

Surveillance system shall be installed to pin the locations of Facebook users who shared fake information, the premier stated adding he already knew the 23 July plan and urged people to stop such dangerous plan.

The premier emphasized that the installed surveillance system aims to prevent activities detrimental to the national development and to protect people’s lives from attempts to destroy Cambodia by some groups like in the past.

He urged people to protect peace, as peace forwards development.

“Peace and development are in hand, and should it be gone? Neither should be at any cost. Cambodian shall not lower their heads for foreigners,” he stated.

Prime Minister Hun Sen said that in order to maintain peace and development, the best option is to vote for Cambodian People’s Party (CPP), which is ranked 20th.