PM Hun Sen: No Tolerance for Anyone Disuniting Cambodia 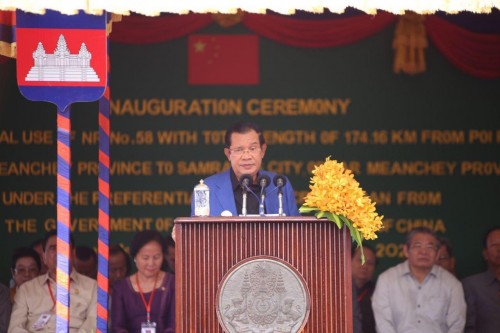 Prime Minister Hun Sen warned not to tolerate anyone whose activities led to disunity, nor allow any foreigner meddles in the internal affairs of the Kingdom.
He spoke Wednesday at the inauguration ceremony of National Road 58 held in Poipet city, some 400 km northwest of Phnom Penh.
“What do they want more when Cambodia is already developed as today,” he said.
“We would not tolerate any actions leading to disunity and that we would not allow foreigner to intervene in our internal affairs, leading to chaos and instability.”
The premier’s motto is “reforming internally and make friends abroad based on independence and sovereignty.”