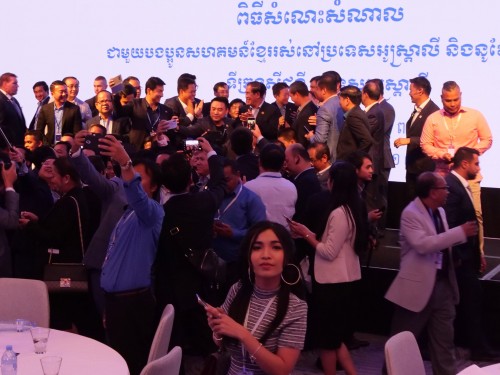 Prime Minister Hun Sen considered the handover agreement between Sam Rainsy and Vietnamese ethnic group leader Kok Ksor as the most dangerous thing for the nation, and that he claimed Montagnard or Degar ethnic minority is Vietnamese.
His remark was made during a meeting with Cambodian people living in Australia and New Zealand in Sydney on Friday.
“When it comes to indigenous people, have you ever known the Montagnards in Cambodia? Is this our minority? When they sign, they use three flags, including Khmer national flag, an American flag and Degar flag. That means Cambodia will lose four provinces to Vietnam. If the Montagnards are Cambodians, why do we need to have a separate flag?” the premier questioned.
“Cambodia opposes intervention as stated in the constitution. We respect our indigenous people, but we do not have Montagnard or Degar. We have Jaray, Steang, Phnong…The Montagnards immigrated to our country for the interview to the third country, and when they failed, they would be sent back to Vietnam. Why let this group have our four provinces…Montagnard is the ethnic group of Vietnam. Rainsy gave those four provinces to the group is like giving those provinces to Vietnam”, he added.
The premier said that he will absolutely protect Cambodia’s sovereignty.
Sam Rainsy signed an agreement to hand four Cambodia’s provinces, including Ratanakiri, Mondulkiri, Kratie, Stung Treng to Vietnam, according to Facebook of Cambodia National Rescue Party’s activist “Rithy Erng” on Tuesday.