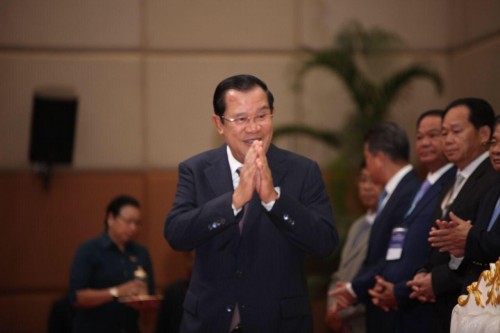 Cambodia’s Prime Minister Hun Sen has called on people not to worry about the upcoming 9 November 2019, as the Royal Government of Cambodia will take legal actions against the nine traitors wanted.
The call was made at the ceremony on official implementation of National Strategic Development Plan (NSDP) 2019-2023, held at Sokha Phnom Penh Hotel.
“I confirm that there will be no fights in Phnom Penh; we will take actions against the only nine people wanted,” said Prime Minister Hun Sen.
“The nine traitors will not appear on 9 November. They already delayed the flight to Bangkok and not sure if they will come,” he added.
Prime Minister Hun Sen has criticized the uncertainty of convict Sam Rainsy, saying Rainsy has always been cheating on supporters.
He addressed that the outlawed opposition’s expressions have been beyond the redline, for they announced the arrest of the elected prime minister and ordered the king to abdicate.
The Strongman announced that he abides the democratic process and gives all the rights to those who win the elections, not those who usurp the power by attempting a coup to overthrow the legitimate government and arrest the ruling prime minister.
“I respect the democracy – respect those who compete through elections,” he underlined.