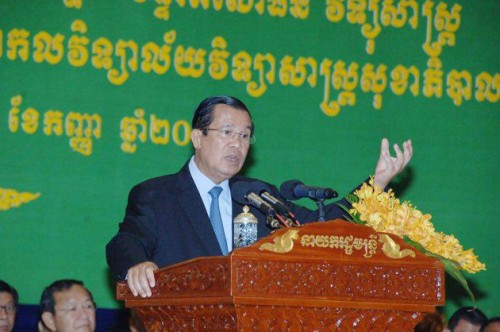 Prime Minister Samdech Akka Moha Sena Padei Techo Hun Sen said this morning’s extraordinary session of the National Assembly (NA) was not to strip the parliamentary immunity of H.E. Kem Sokha, President of the Cambodia National Rescues Party (CNRP), but to open way for the competent authorities to continue the legal procedures.
H.E. Kem Sokha was arrested in flagrante delicto, therefore his immunity cannot protect him [from the arrest], underlined Samdech Techo Hun Sen while presiding over here this morning the graduation ceremony of nearly 4,000 medical students, before his departure for Nanning, China to attend the 14th ASEAN-China Expo.
The premier went on to say that treason cannot be tolerated […], and if the conspiracy is conducted by the whole party, that party will be punished according to the law, i.e. be dissolved.
“We don’t allow any national treason act happen as in 1970 (Coup d’état against His Majesty the late King-Father Norodom Sihanouk, then Cambodia’s Head of State),” he said. “It’s lucky that we can find this conspiracy on time. If the party (CNRP) continues to protect and block the legal measures against this national treason, it shows the party’s disloyalty to the nation. Therefore, there is no time left for the party to continue in the democratic process in Cambodia.”
In Cambodia, he added, there are many political parties, therefore without that party (CNRP), there are still many others participating in the country’s democratic process.
“Democracy without the rule of law means anarchy which leads to bloody conflict,” he stressed.
In its extraordinary session held here this morning under the chairmanship of its President Samdech Akka Moha Ponhea Chakrei Heng Samrin, the NA decided to let the competent authorities to continue the legal procedure against H.E. Kem Sokha, also Lawmaker for Kampong Cham constituency.
H.E. Kem Sokha was arrested on Sept. 3, 2017 at 00:35 in flagrante delicto by the judiciary police officers in accordance with the Criminal Procedure Code of the Kingdom of Cambodia for his conspiracy with foreign power to harm the country.
A video clip broadcasted by the Cambodian Broadcasting Network (CBN), based in Australia, and other evidences collected by the competent authority clearly prove the conspiracy between H.E. Kem Sokha and the accomplices with foreign power, which harms the Kingdom of Cambodia, said the royal government in a recent statement.