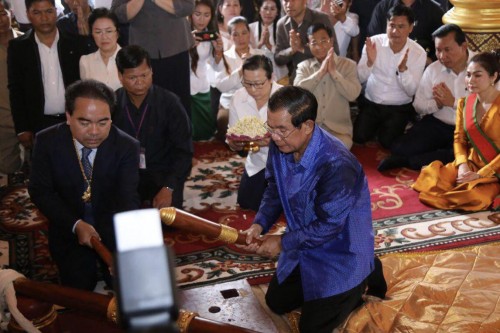 Prime Minister Hun Sen announced on Thursday to continue increasing salary for Royal Cambodian Armed Forces in April, with a bonus of $12.5 (50,000 riel), speaking at the inauguration ceremony of 4-million-dollar Pagoda in Srey Santhor district, Kampong Cham province on Thursday.
In order to enhance the living standards of officials, doctors, police, and gendarmerie, the Royal Government of Cambodia has their salaries promoted twice per year, an increase of 12% of the base salary in January and a bonus of $12.5 in April before Khmer New Year.
“In January, your base salary was promoted, in April your bonus will be remunerated to enjoy dancing during Khmer New Year,” said the premier.
Civil servants, low-rank soldiers, low-rank police officers, and teachers and doctors will get approximately $250, 260, $275, and $280 respectively, according to Ministry of Civil Service spokesman Youk Bunna.