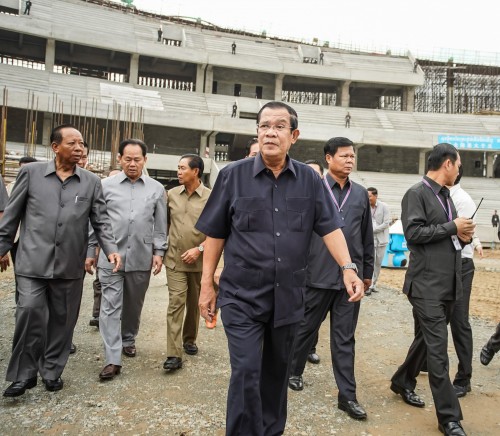 Cambodian Prime Minister Hun Sen firmly committed to implement the fifth approach, ‘surgery’, to dismiss corrupted officials, speaking during his visit to the new stadium Morodok Techo National Stadium on Monday.
“From today, we will send Anti-Corruption Unit to directly arrest you [corrupted official],” said Prime Minister.
Corruption has been found to be a major obstacle to national development. The Royal Government of Cambodia has been actively fighting against corruption.
The premier’s warning was made after the director of Pursat Provincial Cadastral Office and two other officials were arrested on the ground of corruption by the Anti Corruption Unit (ACU) on Saturday morning, 27 July 2019 in Pursat province.
The trio include: Cadastral Office director Leam Bunroeun; deputy director of construction Cheang Vuthy; and another official Te Buntheng. They asked for USD 100,000 from an investor who requested for paperwork to construct a factory in Pursat.
The strongman called the corruption the act of destroying the nation and the good achievement built by the government.
If found committing corruption, the officials will be removed from the posts and their properties will be seized, Prime Minister warned today.
“We must take out sand and gravels from shoes to continue walking. The fifth approach applies to the big and small,” he underlined.
“Surgery” is the fifth approach for better governance. The other four are self-reflection, showering, exfoliation, treatment.