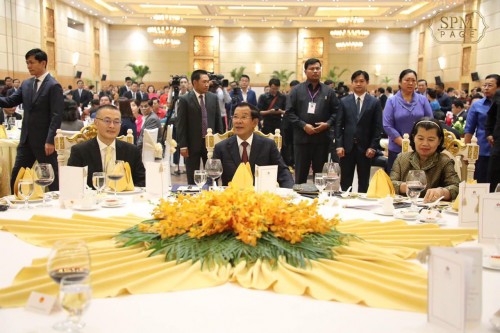 Cambodia’s Prime Minister Hun Sen is optimistic that Vietnamese investors will continue to invest in Cambodia to further expand trade between Cambodia and Vietnam, speaking at the Vietnamese New Year’s celebration dinner at Sokha Phnom Penh Hotel on Friday.
On behalf of the Royal Government of Cambodia, Prime Minister Hun Sen commended the progress of the Vietnamese economy in recent years.
He congratulated the signing of a free trade agreement and investment protection between Vietnam and the EU, which will further promote economic, trade and investment development between Vietnam and the EU.
The premier strongly believed that the economic growth of Vietnam and the signing of this agreement will not only benefit Vietnam directly, but will also benefit its neighbors, including Cambodia.
Cambodia and Vietnam established diplomatic ties on 24 June 1967, but relations severed in March 1970. The two countries re-established ties in January 1979.