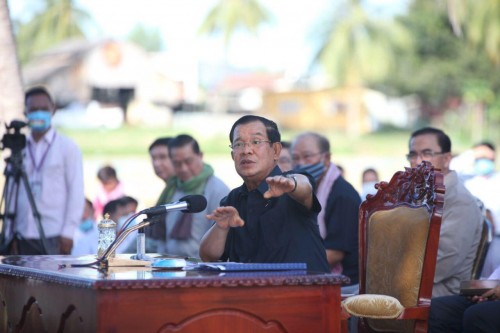 Cambodian Prime Minister Hun Sen said that the Royal Government have transferred USD 40 per month to approximately 170,000 workers in the garment and tourism sectors, who suffered work suspension due to Covid-19.
His remark was made at a visit to Freshwater Aquaculture Research and Development Centre in Peamro district, Prey Veng province on Tuesday.
On 24 June 2020, Cambodian government has launched the government’s cash subsidy programme for poor and vulnerable families adversely affected by COVID-19. USD 25 million per month was allocated to help these poor and vulnerable families.
As of 13 July 2020, at least USD 23 million was transferred to approximately 520,000 people to temporarily support their livings, according to the premier.
“As planned, the Royal Government will support the households for two months and will continue to support for four months if Covid-19 situation not improves. We already reserve cash for 10 months,” the premier said.
He continued to call on workers returning from Thailand to seek jobs in agricultural sector, including livestock and aquafarming.