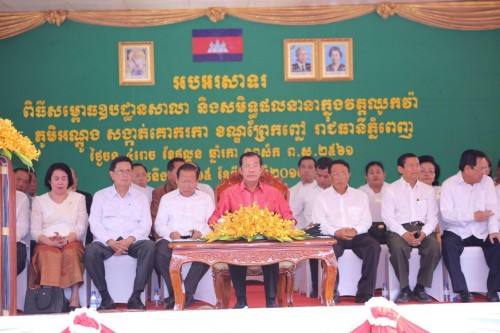 Prime Minister Hun Sen informed that some opposition leaders sent him letters to request for his favor to regain their political rights, speaking at a ceremony in Chhoukva Pagoda located in Phnom Penh’s Prek Pnov district on Monday.
The premier responded that we do not have any measures to lift the court’s sentences or verdicts; however, we can do a favor for current detainees, as Prime Minister has the rights to propose to His Majesty King to release the detainee, according to Prison Law.
“If you want this kind of favor, you shall be sentenced to an imprisonment on top of the banning of political activities,” said the premier.
As the party dissolved, the court decided on November 18, 2017 that 118 politicians from the Cambodia National Rescue Party, including the party’s former Presidents Kem Sokha and Sam Rainsy, were banned from political activities for five years.