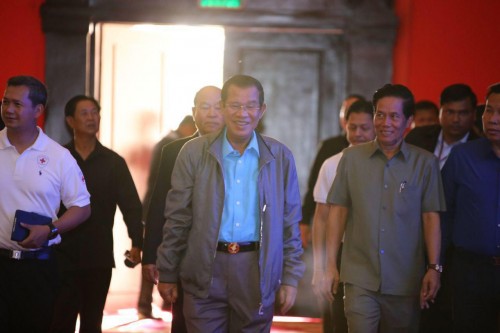 Prime Minister Hun Sen explained on Friday that Cambodia is strong in debt management, as each Cambodian owes only $200 compared to a French $50,000, and American $40,000.
His remark came after a criticism stating that whenever Cambodians born, they are in debt immediately.
“There is no country without foreign debt, except Brunei in our region. In general, each country can borrow at least 40 percent of its GDP. Cambodia’s debt ratio is only 22 percent, including the old-time United States and Russia’s debt”, stated PM Hun Sen at a meeting with members of Cambodian Youth Volunteer Doctors’ Association at Diamond Island Exhibition and Convention center on Friday morning.
“Some countries in our region owe money to 120%, while others owe up to 200% of the debt ratio,” he said.
Although the Cambodian economy has reached a level of commercial interest rates burrow, the Royal Government of Cambodia has requested for preferential interest rates.