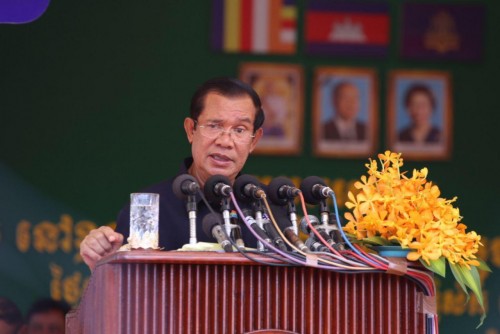 Prime Minister Hun Sen clarified on Friday that forest degradation in Cambodia was caused by ending wars, increase of populations, and the needs of agrarian land for agriculture and agro-industry purposes, speaking at the opening ceremony of 2,000 trees plantation in Preah Vihear province’s Chep district.

He said that he sacrificed his life in order to end wars, which had plagued Cambodia’s development for almost three decades.

“As the war ended, we had opportunity to clear the land for agriculture and infrastructure. If war continued, Cambodians’ blood would be flowing, and people would continue to die every day,” said the premier.

“I just want people to carefully judge my leadership. Ending war is not a small issue. I risked my life in the first phase to end Pol Pot Regime; then in the second phase, as a Prime Minister, I risked my life again to integrate Khmer Rouge troops into one unit,” he added.

On this special occasion, Prime Minister appealed for everyone to conserve and protect trees and animals.

He said writing policies to protect forest is not enough; we have to plant trees and that in the next five years, the site will become a tourist attraction with many types of tree and animals.

“We will not just protect, but plant trees to prevent animal extinction,” he said.

Prime Minister advised relevant ministries to clearly distinguish land for protected areas and for economic concessions, as well as study on projects to rear cows for meat and milk.