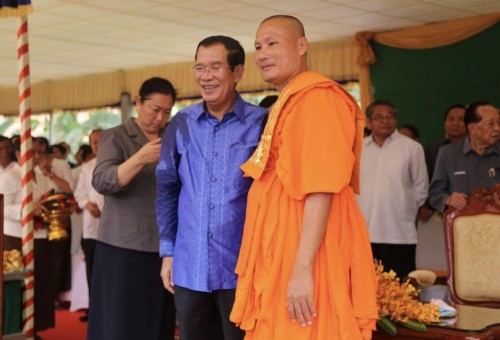 Prime Minister Hun Sen started to distribute 110,000 copies of educating books to teachers across the country after finishing the distributions to students, according to his announcement during the inauguration ceremony of a 4-million-dollar pagoda in Srey Santhor district, Kampong Cham province.
The books will allow teachers to further develop themselves. Each of the teacher will get two copies of two different books, entitled “Krom Ngoy” and “Ou Chong”.
Ngoy and Chong were Khmer poets. Their books focus mainly on Khmer tradition and issues relevant to ways of life of the Cambodia people then through poetic teachings.
The topics include working in the farm to earn a living, choosing the right spouse, looking after children, root causes of poverty and ignorance, consequences of laziness saving for emergency, inspiration to economic success, dominance of foreigners on Khmer people, the loss of sovereignty, and the decline of the Khmer culture and literature, and many more.