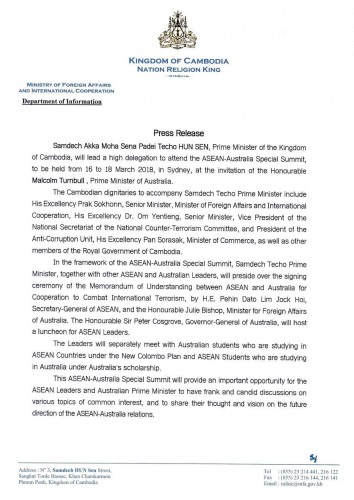 Prime Minister Hun Sen will leave Phnom Penh this afternoon to attend the ASEAN-Australia Special Summit, which will take place from March 16 to 18, 2018 in Sydney, Australia at the invitation of Australian Prime Minister Malcolm Turnbull.

The Cambodian dignitaries to accompany the premier include Prak Sokhonn, Senior Minister of Foreign Affairs and International Cooperation, Om Yentieng, Senior Minister, Vice President of the National Secretariat of the National Counter-Terrorism Committee, and President of the Anti-Corruption Unit, Pan Sorasak, Minister of Commerce, as well as other members of the Royal Government of Cambodia, according to the ministry’s press release issued on Monday.