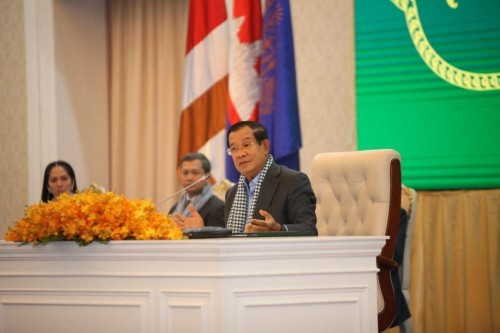 Cambodian Prime Minister Hun Sen said he considered requesting His Majesty King Norodom Sihamoni to put Cambodia in state of emergency to fight Covid-19.
The premier spoke in a meeting with 400 volunteered doctors to fight Covid-19 on 25 March 2020 at the Peace Palace.
“As my appeal to fight Covid-19 is not effective, I consider implementing Article 22 of the Constitution, placing state of emergency,” the premier stated.
Cambodia’s Constitution Article 22 stipulates, “When the nation faces danger, the King shall make a public proclamation placing the country in a state of emergency after unanimous agreement from the Prime Minister, the President of the National Assembly, and the President of the Senate.”
As of 11 a.m on 25 March, Cambodia has confirmed 93 cases of Covid-19 with two latest cases found on the both French in Sihanoukville, according to Prime Minister Hun Sen.