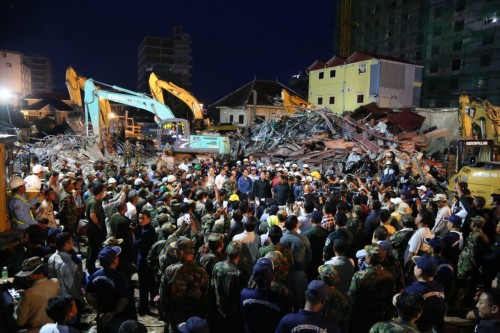 Cambodian Prime Minister Hun Sen condemned the dissolved oppositions and its accomplices for using the negative impacts of Chinese investment as the tool to incite for hatred against the government, speaking at the press conference after clearing the site of collapsed building in Sihanoukville on 24 June.
“This issue [collapsed building] has become a political agenda of the dissolved opposition to attack the government. In fact, when the incident happened, it brings the same impacts regardless of the Chinese, American, English or French Investment. Every country conducts business with China. When we are fortunate enough to have Chinese investment, they criticized that it is a debt-trap policy or China colonizes the kingdom. They never see the bright side of the investment. Sihanoukville will become the great coast when the construction finished.”
He continued that, “Not only Chinese caused problems in Cambodia. Other nationalities also rape Cambodian women and bring in drugs.”
“We need more Chinese tourists. While Thailand receives 10 million Chinese tourists, we only get 2 million. Our target is 5 million. When they come, they never bring their own food. They buy Cambodian food [contributing to our economy]. Never take a small problem to undermine the investment climate and our relations. We will strengthen our law enforcement, as supported by the Chinese Ambassador.”