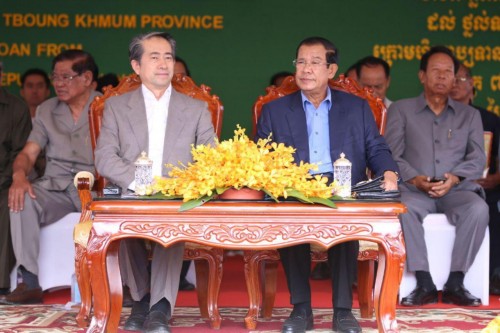 Prime Minister Hun Sen on Friday morning strongly condemned the attack on the Cambodian blue berets’ headquarter in Mali, Africa on March 22, 2018. The premier reiterated that these attacks will never stop the Royal Government of Cambodia from sending peacekeepers to missions abroad.

His remark was made during the inauguration ceremony of rehabilitation project of National Road 11, with a length of 96 km, under the government’s concessional financing of more than $94 million on Friday morning in Prey Veng province.

“We condemn the rebels in Mali that continued to attack the people of Mali and UN peacekeepers,” stated the premier adding that “Our compatriots, please accept the responsibility to participate in global peacekeeping operation”.

The premier recalled the meeting with the United Nations secretary-general, affirming that Cambodia will continue to send forces to join the UN peacekeeping missions.

Two Cambodian peacekeepers’ buildings in Mali’s Kidal area were re-attacked by an unidentified group on Thursday afternoon, but no one was injured, according to Defense Ministry spokesman General Chhum Socheat.

In May 9, 2017, Cambodia’s blue berets in Central African Republic were attacked by rebel group, leaving four Cambodian forces dead and one injured.

Since 2006, Cambodia has sent 4,769 Cambodian peacekeepers, including 203 women to participate in 10 missions in eight countries, such as Sudan, South Sudan, South Africa, Central African Republic, Lebanon, Syria, Cyprus, and Mali, according to General Sem Sovanney, director-general of the National Center for Peacekeeping Forces, Mine, and ERW Clearance.