PM Hun Sen: Chun Chanbuth Requests a Military Leader and My Son to Save his Life 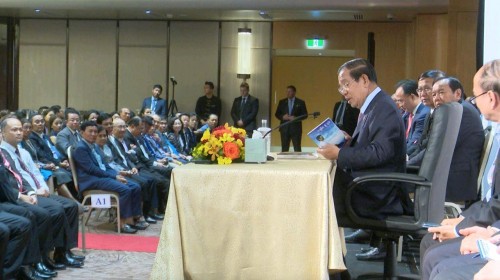 Chun Chanbuth, Deputy Director of US-based Radio Free Asia, had asked Lieutenant General Mao Sophan, Commander of Brigade 70, and Hun Manet, Lieutenant General of the Royal Cambodian Armed Forces, to save his life from being assinated by the CIA, Prime Minister Hun Sen told Cambodians living in Australia in a meeting on Friday.
“Chun Chanbuth is now present in Australia. When you have a problem, you messaged to my son through whatsapp…You told Mao Sophan to help you escape from murder like Kem Ley,” said the premier.
“Chun Chanbuth, do you dare to confess that you used to work with General Mao Sophan and General Hun Manet? You scolded and insulted me, but requested assistance from my son,” Prime Minister Hun Sen added.
Prime Minister Hun Sen also stated that Chun Chanbuth used to be a spy for him.