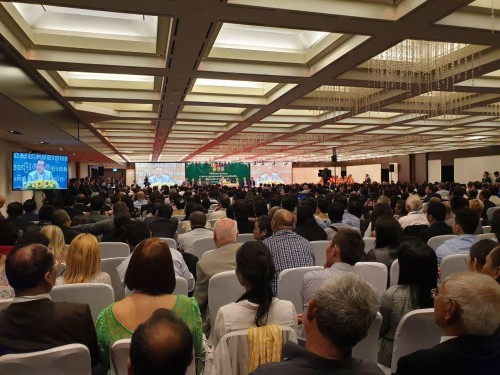 In response to accusation of China’s assistance as debt-trap policy, Cambodian Prime Minister Hun Sen clarified that the Chinese investment and concessional loan fill in the development loophole of Cambodia.
The clarification was made in a meeting with more than 1,200 Cambodians living in Switzerland.
Prime Minister considered the accusation on China’s assistance as debt-trap policy a “stir” in Cambodia-China relations under the pretext of geopolitics.
He explained that Cambodia does not solely borrow from China, but also from neighboring countries and other development partners.
“Cambodia only borrows the low-interest loans,” the premier underlined.
He added that Cambodia’s current public debt-to-GDP ratio remains low, only 21 percent of the kingdom’s GDP, while Cambodian budget law allows us to borrow up to 40 percent of our GDP.
Prime Minister also recalled the contributions of Japan, China and South Korea in building Cambodia’s infrastructure.
He continued that China is an important player in building infrastructure in Cambodia, including the Se Kong Bridge in Stung Treng province, Prek Kdam Bridge, outskirt of Phnom Penh, the Prek Tamak Bridge in Kandal province, and Takhmao Bridge across the Tonle Bassac River in Kandal province.
“Without China’s aids, who fills in the loophole of our development,” Prime Minister Hun Sen questioned, saying Cambodia does not discriminate against any foreign investors.