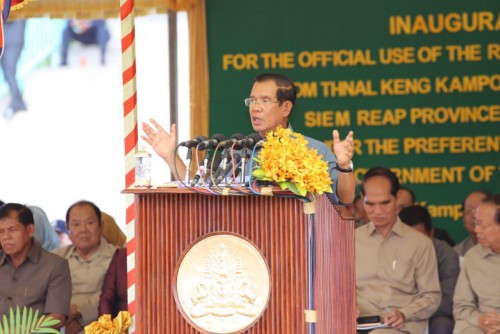 Prime Minister Hun Sen said that through the construction of National Road No. 6, the Government of China has helped Cambodia connect Phnom Penh to other provinces.

The premier thanked the Government of China through the Chinese Ambassador to Cambodia Xiong Bo for assisting Cambodia’s infrastructure that paves ways for economic growth, speaking on Monday at the inauguration ceremony for the official use of the reconstruction of NR6 from Thnal Keng Kampong Cham province to Ang Krong Siem Reap province, with the length of 248 km under China’s preferential buyer’s credit loan.

“This NR6 facilitates our transportation and connects from Phnom Penh to Preah Vihear and Siem Reap,” stated the premier.

It reminded him back in the day that Kompong Thom’s Stoung and Siem Reap’s Chi Kreng used to be battlefields that people could not access; however, today it becomes development areas.

Prime Minister Hun Sen also thanked the affected people who agreed to take compensations for the sake of road construction. Without the support of these people, the premier would not be able to carry out the win-win policy, end the war, and bring today’s peace and development.