PM Hun Sen: Cambodian People to Be Able to Overcome the Flash Floods Together 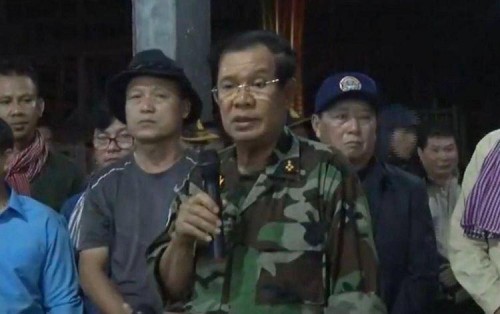 Prime Minister Samdech Akka Moha Sena Padei Techo Hun Sen has believed that the Cambodian people will be able to overcome together the flash floods.
The Premier expressed his conviction while paying a visit to flood-affected victims and inspecting flash flood situation in Khan Dangkor, Phnom Penh this evening.
“The current priority of the Royal Government is to rescue people from the flood-affected areas,” he underlined.
Samdech Techo Hun Sen said he would like to see the victims’ and flood situation by his own eyes, not just read the report.
Besides, Samdech Techo Hun Sen called on the victims to pay attention to hygiene, venomous animals as well as to safety distance to prevent the spread of COVID-19 pandemic.
Samdech Techo Prime Minister praised the armed forces and all relevant authorities for their collaboration in rescuing the victims, and thanked the charitable people for their funds in support of the Royal Government’s emergency response and rescuing efforts, which rose now to more than US$6 million.
According to the Premier, only US$800,000 of the amount raised has so far been used and the rest will be given as support fund to the victims when the water recedes.
A report of the National Committee for Disaster Management (NCDM) shows that from Sept. 1 to the morning of Oct. 15, 2020, the ongoing flash floods have affected 19 capital and provinces across the country, killing 13 people and leaving ten thousands others homeless.
Competent authorities at all levels have been actively taking measure to timely assisting the affected people so as to reduce to the maximum the difficulties and the impact on people’s properties and lives.