PM Hun Sen: Cambodia Not to Declare the State of Emergency 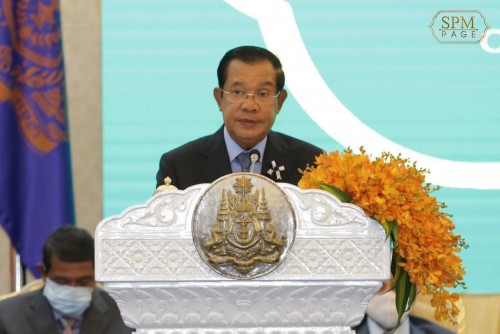 Cambodia will not declare the state of emergency with the current situation of COVID-19 transmission in the country, stressed Prime Minister Samdech Akka Moha Sena Padei Techo Hun Sen in a voice message this evening.

“I was considering whether or not to declare the shutdown of Phnom Penh or some part of the country because we have already had the law on state of emergency. I can request to His Majesty the King to sign in order to put some part of the country or Phnom Penh or the whole country in the state of emergency. But I don’t want to do so as it affects the freedom of many people while there are only more than 900 people who came in contact, direct or indirect, [with the Nov. 3 event] due to our negligence,” the Premier said.
Samdech Techo Hun Sen continued that this consideration was made after he had urged for strict quarantine of those involved, both direct and indirect, with the Nov. 3 event.
As of this evening, four of the over 900 people believed to come in contact with the Nov. 3 event (visit to Cambodia by infected Hungarian foreign minister) have been tested positive for COVID-19.
The 12-article Law on the Management of the Nation in Emergency was promulgated on April 29. According to the law, a state of emergency is declared when the nation faces dangers such as war or foreign invasion, public health concerns caused by pandemics, serious chaos to national security and public order, and severe calamity threatening or causing nationwide dangers.