PM Hun Sen: Cambodia Is Not Biased to Any Country 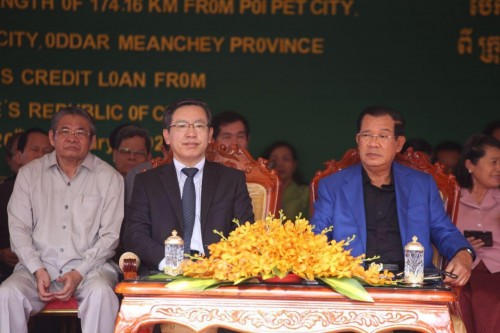 Prime Minister Hun Sen said Cambodia makes friend with every country indiscriminately, speaking Wednesday at the inauguration ceremony of National Road 58 held in Poipet city, which he co-chaired with Chinese Ambassador to Cambodia Wang Wentian.
The premier’s statement came after a number of analysts, including a political commentator Meas Nee, said that prime minister is biased towards China and leaving US and Europe.
“I have never abandoned any countries. Everyone is my friend,” said the Premier.
“Cambodia accepts friends regardless of political background. This let us setup diplomatic relations with over 170 countries,” he added.
The premier’s motto is “reforming internally and make friends abroad based on independence and sovereignty.”
According to Prime Minister Hun Sen, China has a huge burden on helping other countries around the world, suggesting that if more countries help Cambodia, China would be grateful.
The premier thanks China for granting concessional loans and grant aids to the Kingdom.