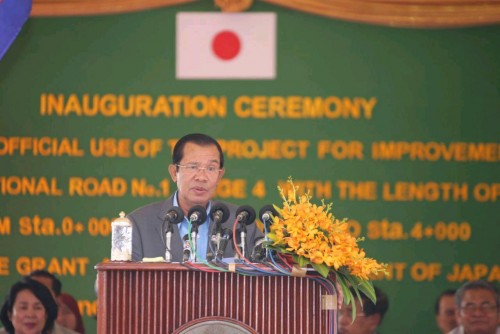 Prime Minister Hun Sen stated that over 39 years of his premiership, Cambodian government has never used foreign aid to spend on Cambodian officials’ salary.
His remark was made on Tuesday morning during an official launching of the National Road No.1, Phase IV, with a total length of four kilometers, in Phnom Penh area.
The statement came after a criticism saying that the Royal Government of Cambodia has used foreign aid to pay salaries to civil servants.
“They say that Hun Sen government corrupts the foreign aid, but only Japanese companies bid. The bidding was held in Tokyo and Cambodia can only observed”, stated the premier.
“I have been prime minister for 33 years plus my term in deputy prime minister and foreign minister that totaled to 39 years, never has Cambodia burrowed or asked for donations from foreigners to remunerate to civil servants; no one allows us to burrow to do so,” he added.