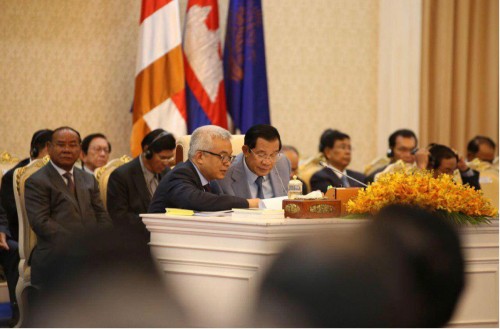 “With the adjustment to our goods scanning procedure, our private sector could earn USD400 million from cost effectiveness. We can pay the tax if EU requires us to do,” said Prime Minister Hun Sen.

Prime Minister also reminded the public that Cambodia has experienced a brutally bloody history, yet she would never bow her head down to any foreign boss. Cambodia will never let anyone control her destiny and that she never trades her independence and sovereignty with any kinds of aids.

The Premier further underlined that Cambodia would never bow her head to gain EBA trade preferences. Any leaders who have a tendency to bow the head shall never lead Cambodia. He urged the next future leaders to take late King Father as a role model.

According to Strongman Hun Sen, the disaster Cambodia had faced stemmed from the coup launched by Lon Nol clique on 18 March 1970, commanded by foreign circles, pushing Cambodia from an island of peace into a full-flame war.

From 1970-1975, the war killed over one million Cambodians and inflicted the most severe destruction to the country’s socio-economic infrastructure. On 17 April 1975, the regime of Khmer Republic fell. People hoped to have lived in peace to restart their livelihood. However, their hopes evaporated in the blink of an eye as they fell into a newer disaster – the Khmer Rouge genocidal regime.