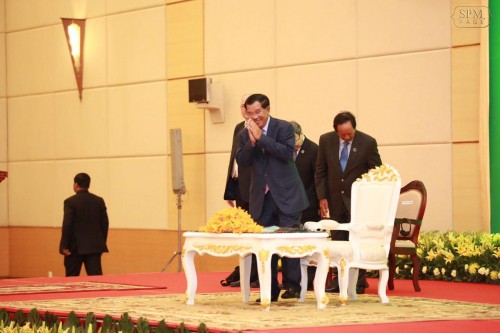 Prime Minister Samdech Akka Moha Sena Padei Techo Hun Sen has affirmed that Cambodia is playing an active role in boosting the negotiations to conclude a free trade agreement called “Regional Comprehensive Economic Partnership-RCEP”.
The Cambodian premier made the affirmation at the opening ceremony of the Fifth China Round Table on WTO Accession themed “Best Practices on the Accessions of LDCs”, at Sokha Hotel in Siem Reap province this morning.
Consisting of 16 countries, the agreement is expected to be signed this year in order to expand markets for goods and services and to attract foreign investments, he underlined.
Moreover, Samdech Techo Hun Sen recalled the key contribution of Cambodia to the establishment of ASEAN Economic Community in late 2015 and the liberalisation with six ASEAN dialogue partners, including China, Japan, Korea, India, Australia, and New Zealand.
Prime Minister Hun Sen also shared Cambodia’s experience in national development after the civil wars with other LDCs.
After becoming member of ASEAN in 1999 and of WTO in 2004, said Samdech Techo Hun Sen, Cambodia has changed her face and is preparing herself to become a developing country in the future through the adoption of development policies on industry, agriculture, tourism, services and so on by linking national development policy to regional and international development policies.
RCEP negotiations were formally launched at the ASEAN Summit in Cambodia in November 2012. RCEP is a proposed free trade agreement between the ten ASEAN member countries and the six dialogue partners.