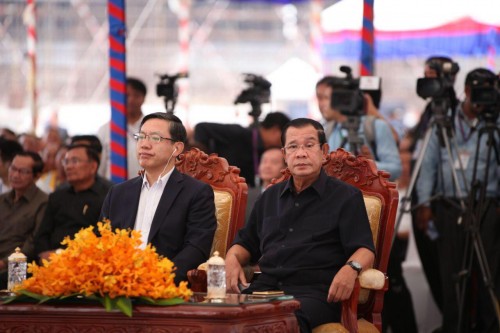 Cambodian Prime Minister Hun Sen called on Cambodian people to consume pork as usual and not to worry about African swine fever, as it only affects animals not humans, speaking during his visit to the new stadium Morodok Techo National Stadium on Monday.
“Regarding African swine fever, I would like to appeal to our people to eat pork as usual and not to worry. I also eat pork every day,” said the premier.
The fever has caused a sharp decrease of pork consumption, as people worried that eating pork will affect their health, yet health ministry spokesman Ly Sovann said African swine fever can not transmit to humans.
Prime Minister Hun Sen warned that if people continued to avoid pork, the price of beef and fish will increase. It would also affect fisheries, as the government bans fishing in the breeding season.
African swine fever has killed about 2,960 pigs in five provinces across Cambodia, including in Tbong Khmum, Svay Rieng, Takeo, Kandal and Rattanakiri province, according to the report of the Ministry of Agriculture released on mid-July.
The ministry began to temporarily halt the rearing of pigs, buy-sell, and transports of pigs and pork since 4 July 2019. Relevant officials and authorities took action by inspecting the sites hit by fever, and destroyed nearly 800 pigs in the attempt to stop the spread of the disease.