PM Hun Sen Calls on Citizens to Fight for Sovereignty; Not to Fear EBA Trade Threat 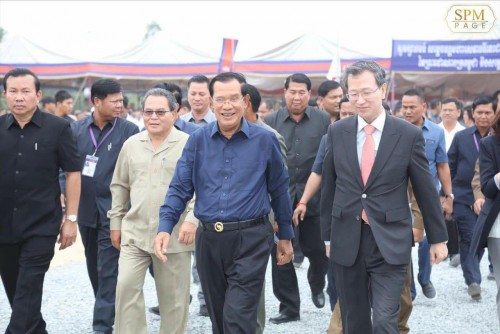 Cambodian Prime Minister Hun Sen strongly appealed to Cambodian citizens not to fear EU trade threat but to stand up and fight for peace and sovereignty.
The premier addressed Tuesday at the groundbreaking ceremony for rehabilitation project of National Road 2 and 22 held at Phnom Penh’s dangkor district.
He reiterated his commitment not to trade the Kingdom’s sovereignty and independence with any aid or preferential trade scheme.
“Cambodia wants peace and must maintain her peace, independence and sovereignty at any cost,” he underlined.
“We want to be friends and partners with other countries around the world. But if they do not understand us and force us to follow them, we strongly disagree, as we have already experienced countless wars. We have survived from the wars they created for us, so I would like to call on Cambodians to defense the Kingdom’s independence, sovereignty and peace. Don’t bow down, we must work hard to live”, Prime Minister Hun Sen stated.
Cambodia’s Strongman also recalled that the Kingdom had suffered enough from foreign invasion and interference in the internal affairs. What Cambodia prioritises today is peace and law enforcement, stressing, “everyone is under the laws.”
The premier informed the compatriots that if some factories in Cambodia shut down, the cause is coronavirus-related raw material supply disruptions; not because of the EU’s preferential trade scheme EBA.
He elaborated that even big companies like Nike and Addidas face issues in purchase order as their operations impacted by raw material supply from China.
“In the short term, we expect the situation to have a material impact on our operations in Greater China,” Nike said in a statement Tuesday,” according to CNN.