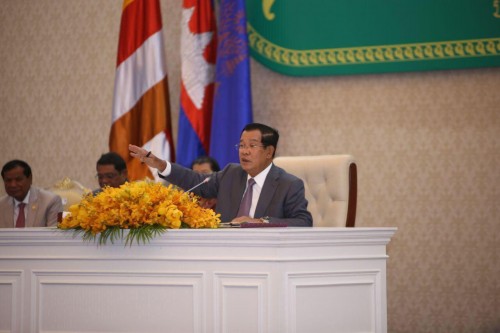 Cambodian Prime Minister Hun Sen, on Monday, urged players to obey game rules and regulations and advised not to bring shame back to the kingdom, addressing before 400 Cambodian athletes and delegates to the 30th SEA Games, to be held from 30 November to 11 December 2019.
“Win or lose is normal in sports, but do not bring shame back to Cambodia,” said Prime Minister Hun Sen.
“Do not violate the rules of the game that lead to red card penalty and kick out of the game.”
He also advised athletes not to use any energy substances or drugs that affect the nation’s honor.
The Southeast Asian Games, also known as the SEA Games, is a biennial multi-sport event involving participants from the current 11 countries of Southeast Asia. The games is under regulation of the Southeast Asian Games Federation with supervision by the International Olympic Committee (IOC) and the Olympic Council of Asia.
Cambodia will host SEA Games in 2023.