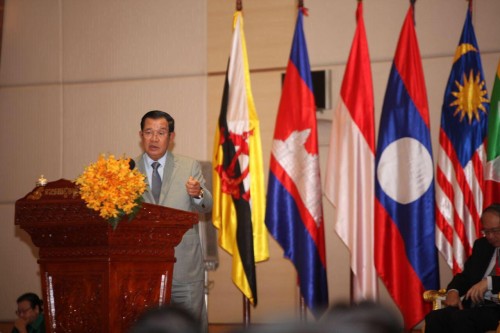 Cambodian Prime Minister Hun Sen said that the Association of Southeast Asian Nations (ASEAN) will host the 2034 World Cup, addressing at the opening ceremony of the 12th ASEAN-China Prosecutors-General Conference, held in Siem Reap province, Cambodia, on 6-7 November 2019 under the theme “The Role of Prosecutors in Combating Trafficking in the Region”.
“ASEAN has a common point that in 2034, ASEAN will host the World Cup; ASEAN and FIFA recently signed MoU to establish formal cooperation between the two entities to leverage the role of football in social development in the region during the [35th] ASEAN Summit in Bangkok,” said Prime Minister Hun Sen.
“ASEAN countries will establish a ASEAN Football Team to compete with other countries, yet we are not sure whether we will win or not,” he added.
After establishing football team, ASEAN will work together on other things, especially the issue of flows of people and labour approved in Manila, Philippines, according to Premier Hun Sen.
Head of the Royal Government highlighted that it is good to promote job opportunity, but its issue is the rise of human trafficking case – the issue that requires clear cooperation.